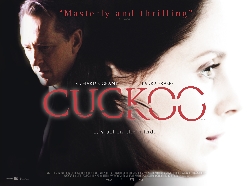 Description:
Polly (Laura Fraser) is trapped in a dead-end life. But when she has the chance to escape, her nearest and dearest have other ideas. Alone at night, mysterious sounds surround her. Voices in the darkness. Whispers of deceit. Polly knows she’s not cuckoo, but why won’t the noises go away? Polly turns to the one person she can trust – her boss, Julius (Richard E. Grant). But Julius has a dark secret of his own. He wants Polly, and he’ll do anything to get her.

In Films-list.com we have selected the most viewed movies from category - Thriller, Psycho-Drama. Enjoy the best films specially selected for you! Cuckoo (2010) is the right choice that will satisfy all your claims.