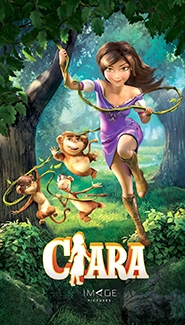 Description:
Once in a thousand years a magical dragon is born in a fairy land. Because of his exceptional rarity, he is kidnapped by evil forces who want to use his magical abilities. Accidentally they lose the dragon cub who is found by two friends – a merry raccoon and a grumpy dwarf.

The friends set off on a long journey to return the little dragon to the Dragon city. On their way they meet the girl named Clara and her assistants – three funny monkeys. Clara doesn’t remember anything about her past and
10M-25M
100% Fully Funded

In Films-list.com we have selected the most viewed movies from category - Animation, Comedy, Fantasy. Enjoy the best films specially selected for you! Clara (2017) is the right choice that will satisfy all your claims.