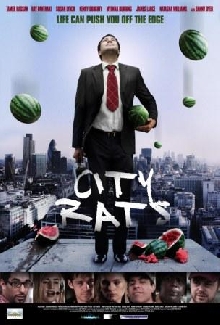 Description:
Eight haunted people meet and fall apart - looking for redemption in each other. Jim is throwing watermelons off his office roof as an experiment for a possible suicide. Sue is on an adjacent roof about to jump herself. Sue’s ex-boyfriend, Dean, is struggling with his creativity and looks for a muse in his neighbour, Gina who is a prostitute. Dean soon finds out that Gina never does anything for free. After a fling with Dean, Olly is lost in a world of sexual confusion when he and his brother, Chris, embark

In Films-list.com we have selected the most viewed movies from category - Drama, Black Comedy. Enjoy the best films specially selected for you! City Rats (2008) is the right choice that will satisfy all your claims.