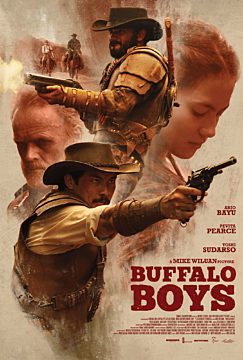 Description:
In 19th Century Java, a brutal massacre and the murder of Sultan Hamza by Captain Van Trach and his Dutch soldiers force Arana, Jamar and Suwo - the sultan’s brother and infant sons - to flee the country, bringing them halfway around the world to the American Wild West. After working the railroads and learning the cowboy way of life, Arana tells the boys it’s time to return to their homeland and avenge their father’s death. Back on Indonesian soil, the hunt for their father’s killer begins. Along the way, t

In Films-list.com we have selected the most viewed movies from category - Action/Adventure, Drama. Enjoy the best films specially selected for you! Buffalo Boys (2019) is the right choice that will satisfy all your claims.