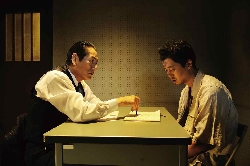 Description:
This is based on the notorious true murder case took place in 1966 in Shizuoka,
Japan. A former professional boxer, Iwao Hakamada was arrested and sentenced to death but this was not such a simple case – because he is suspected for being falsely charged. Since the day of the verdict in 1968, execution has not been carried out and Hakamada is believed to be the world’s
longest-serving death-row inmate.
Montreal World Film Festival 2010 - Competition, Int'l Rome Film Festival 2010 - Focus

In Films-list.com we have selected the most viewed movies from category - True Story, Drama. Enjoy the best films specially selected for you! BOX - The Hakamda Case (2010) is the right choice that will satisfy all your claims.