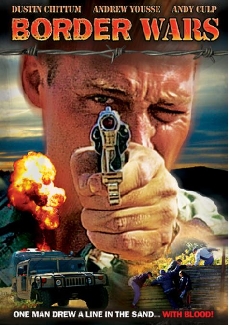 Description:
Andrew Jackson, a marine back from the Middle East, reunites with two high school buddies, Dustin and Brodie, and forms a quasi-militia unit. After holding at gun-point a group of illegal Mexican immigrants, Andrew gains national media exposure and the group decides that the Arizona/Mexico border will be their area of operation. Dustin, the sensible one, argues with his Latina girlfriend about the stability of Andrew, but ultimately he decides to join Andrew and Brodie on their trek to the border with heart

In Films-list.com we have selected the most viewed movies from category - Action/Adventure. Enjoy the best films specially selected for you! Border Wars (2008) is the right choice that will satisfy all your claims.