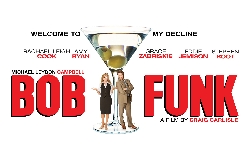 Description:
Bob is not having a spectacular decade: his wife left him, his drinking is out of control and he just got fired - by his mother! If he intends to rejoin the sales force, Bob will have to follow his mother's demands that he get his life together and “get some help.” Bob Funk revolves around the quick-witted and sardonic title character as he attempts to regain his job and his life. And if that isn't tough enough, he finds himself falling for the woman his mother has hired to replace him.

In Films-list.com we have selected the most viewed movies from category - Comedy. Enjoy the best films specially selected for you! Bob Funk (2008) is the right choice that will satisfy all your claims.