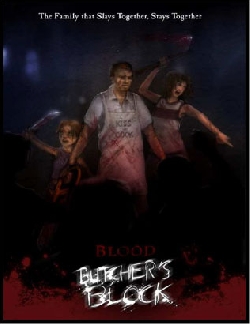 Description:
Blood: Butcher?s Block takes place immediately after the film ends. A cinematic at the beginning of the game recreates the final scene of the film, in which a shipment of ground meat contaminated with vampire blood is consumed at a community BBQ. The meat transforms people into ghoulish vampires, thirsty for human blood. People who are attacked and killed by vampires become vampires themselves, and the vampire plague spreads quickly through the population of the community.
The player is dropped into
Blood: Butcher's Block acts as a sequel to the feature film Blood: A Butcher's Tale. These can both be bundled in a DVD set for distribution.

In Films-list.com we have selected the most viewed movies from category - Horror, Thriller. Enjoy the best films specially selected for you! Blood: Butcher's Block (Video Game) (2008) is the right choice that will satisfy all your claims.