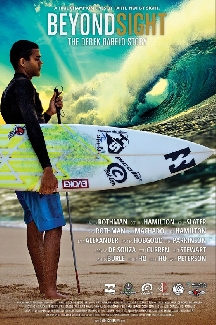 Beyond Sight: The Derek Rabelo Story

Description:
Amidst the small beautiful city of Guarapari, Brazil, Derek Rabelo's father prayed that his son would become a famous professional surfer. Unfortunately on May 25th 1992, his prayer seemed unanswered when Derek was born blind. Seventeen years later Derek decided that despite his blindness he still wanted to surf and that he wanted to surf Pipeline on the North Shore of Oahu. Through the encouragement of his parents, best friend, and surf coach, Derek embarked on a three-year journey of grueling mental, phys

In Films-list.com we have selected the most viewed movies from category - Documentary. Enjoy the best films specially selected for you! Beyond Sight: The Derek Rabelo Story (2014) is the right choice that will satisfy all your claims.