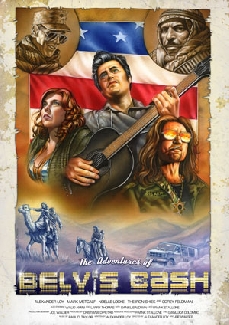 Description:
An American Rock & Roll performer, Belvis Bash (Alexander Loy), is recruited by Major Hickory of the US Army (Mark Metcalf), to go to Afghanistan and win the hearts and minds of its people. With the help of an outrageous, politically incorrect comic, Samuel Stilman (Corey Feldman) and a musical theater actress, May Summer (Noelle Locke), he embarks upon his quest that will bring him face to face with the modern darkness of this ancient land.

Metal Life Magazine hails this film as "an original,
1M-3M

In Films-list.com we have selected the most viewed movies from category - Comedy. Enjoy the best films specially selected for you! Belvis Bash (2012) is the right choice that will satisfy all your claims.