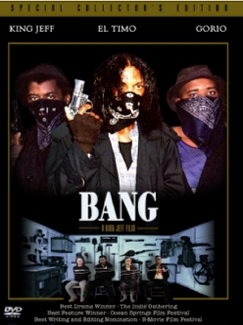 Description:
BANG is the chilling story of four police officers who find themselves captured and tormented in an abandoned garage by three masked gang members who have vowed to execute one of the cops every hour for reasons unknown. As they contemplate the dreaded fate awaiting them, each of the four cops reminisces about an incident that he was involved in that he believes may have landed him in the fatal predicament with the three mysterious gangsters. BANG is a mixture of dark humor, explosive action and mystery. Sta
Under 1M
VARIOUS OVER THE YEARS

In Films-list.com we have selected the most viewed movies from category - Action/Adventure, Urban, Thriller. Enjoy the best films specially selected for you! Bang (1996) is the right choice that will satisfy all your claims.