FILM REVIEW - Audience of One 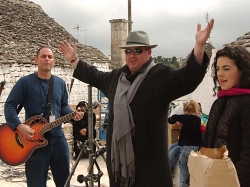 Description:
A documentary following a Pentecostal minister who receives a vision from God to create "Gravity: The Story of Joseph" a $200 million epic science fiction movie based on the biblical story of Joseph, sending him and his followers on a journey of extreme faith.
South by Southwest San Francisco DocFest Silverdocs Film Festival
Special Jury Award - South by Southwest Audience Award - San Francisco DocFest Beyond Belief Award - Silverdocs Film Festival

In Films-list.com we have selected the most viewed movies from category - Documentary. Enjoy the best films specially selected for you! Audience of One (2007) is the right choice that will satisfy all your claims.