FILM REVIEW - As the Gods Will 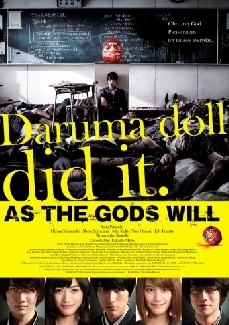 As the Gods Will

Description:
Shun Takahata (Sota Fukushi) is a high school student who is sick of boring everyday life. However, when a Daruma Doll (hollow, round, Japanese traditional doll modeled after Bodhidharma, the founder of the Zen sect of Buddhism) which suddenly appeared at school announces the start of a bloody life risking game, ordinary life crumbles away in an instant.
Rome Film Festival (2014)

In Films-list.com we have selected the most viewed movies from category - Action/Adventure, Thriller. Enjoy the best films specially selected for you! As the Gods Will (2014) is the right choice that will satisfy all your claims.