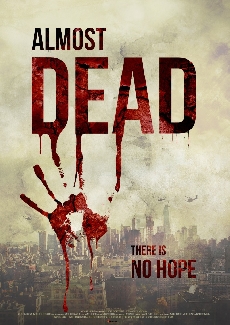 Description:
A mid twenties woman, called Hope, wakes up in a car wreck, at the edge of a deserted forest road, night, covered in blood. Next to her, in the driver’s seat is the corpse of a woman, a gun, and cell phone, low on charge.

She does not remember how she got there. Suddenly, the body next to her wakes up and bites her arm. Hope shoots her dead in the head. From the trunk of the car ... a few minutes later, a stranger appears. His hands tied up with a plastic zip line. He does not know how he’s got

In Films-list.com we have selected the most viewed movies from category - Horror, Thriller. Enjoy the best films specially selected for you! Almost Dead (2016) is the right choice that will satisfy all your claims.