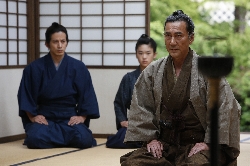 Description:
Shozaburo DANNO (Jyunichi OKADA) is ordered to watch over Shukoku TODA (Koji YAKUSHO) until he commits “Hara-Kiri” (i.e., committing suicide by cutting one’s belly) in three year time. Shukoku was charged for having an affair with the feudal lord’s concubine seven years ago, and had been confined with his family. Shukoku is ordered by his ex-feudal lord to compile the feudal domain’s history. Shozaburo’s task was to report how the incident seven years ago is written in the feudal domain’s history, and to pu

In Films-list.com we have selected the most viewed movies from category - Historical, Drama. Enjoy the best films specially selected for you! A Samurai Chronicle (2014) is the right choice that will satisfy all your claims.