FILM REVIEW - A Play On Words by John Stark 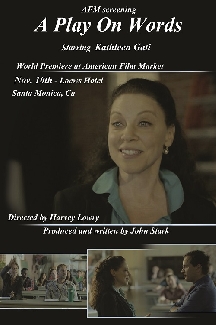 A Play On Words by John Stark

Description:
A Play On Words, a feature film produced and written by John Stark, is being given its world premiere at the 2014 American Film Market in Santa Monica, California, November 10th. Directed by Harvey Lowry, the film stars Kathleen Gati, with a supporting cast of Michael Vaccaro, Susan Ziegler, Tom Groenwald and Katharina Magdalena. Set in a college classroom, where Professor Pavlic lectures on the origin of man and spoken language, four students confront each other and act out their traumatic life experiences
Under 1M

In Films-list.com we have selected the most viewed movies from category - Drama. Enjoy the best films specially selected for you! A Play On Words by John Stark (2014) is the right choice that will satisfy all your claims.