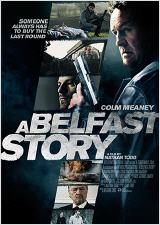 Description:
In a city left torn by war, when a series of murders awaken dormant memories, many fear the worst. Colm Meaney ("Hell On Wheels", "Layer Cake", "Con Air") and Malcolm Sinclair ("Casino Royale", "V for Vendetta") star in a film set between war and peace. Times are changing, car bombs are less common and terrorists find themselves out of work, but old habits die hard. And while most go quietly into the night, one man must find the few who wonʼt comply.
A greying assassin has stopped walking his son to

In Films-list.com we have selected the most viewed movies from category - Thriller. Enjoy the best films specially selected for you! A Belfast Story (2013) is the right choice that will satisfy all your claims.